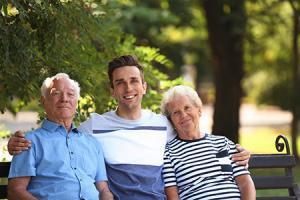 While I have had many, many powerful & meaningful experiences throughout my life in my training, community outreach and professional career, the knowledge and understanding I gained from caring for my own parent was probably the most profound.

I thought I was highly prepared to handle being a family caregiver. After all, I was an expert on Aging and Geriatrics.   I had completed my Medical Residency, Geriatric Fellowship, published medical research on Dementia and Depression.  I had completed “Sensitivity Training” in med school and my Geriatrics Fellowship which was very useful in helping my patients throughout my professional career, but I did not fully understand the challenges and stressors of being a family caregiver until I became one myself.

I had always been very close to my mom, we had a great relationship.  I was lucky live in close proximity to my mom, so we were able to spend a lot time together.  One day while we were at her house, she was helping me put up mylar to cover the sliding door to help keep the cold out.  This is something she had taught us to do, long ago when we lived in the frigid cold of upstate New York.

Before my eyes my mom fell to the ground.  My medical experience kicked in and I realized she was having a stroke. I called 911 and was able to get her to the hospital and get the activase or clot buster.  Sadly, my mom was never the same. While she did regain the ability to walk, her cognitive ability to speak and understand was greatly diminished.  My life profoundly changed from that day forward.  My training did not prepare me for the grief & emotional loss I felt.  On that day, I became a full-time caregiver to my mom. Helping her through the rehab process and assisting her with her activities of daily living which was extremely challenging for me. My mom could not be left alone for long periods of time as she would get anxious, wondering where I was. My medical experience reassured me that this was expected “normal” behavior after a stroke of her kind.  I knew that her repeated questions, forgetfulness and need for companionship was not intentional on her part, but still, it took a toll on me. My mom & I were very fortunate to have a strong support system.  My brother & sister, who are both nurses, were vital in helping me care for our mom at home for the next 2 years until she passed.

This experience truly opened my eyes and added a whole new depth of understanding I could not have known before.  I saw the struggles from both sides. My mom struggling to cope with her new limitations, her fear and anxiety. Myself, struggling to balance the role of caregiver and son, figuring out how to allow myself freedom and personal time for my own physical and mental health.

This experience with my mom, gave me new insight & convinced me there was a better way to meet the needs of both the family caregiver and the patient.  I finally understood personally, the limitations of 1 to 1 in home care. Not just because of the exorbitant cost, as my mother did not have endless means to maintain one to one care, but the lack of physical & emotional support, and increased isolation for both the patient and the family caregiver.  I realized then that a community based Residential Care Home setting, with the appropriate leadership and skills of a Geriatric Trained doctor, was an ideal setting for patients with chronic illness and their families who are going through similar experiences.  Residents benefit from the small family type environment and receive the needed socialization and support and families have a sense of relief knowing their loved one is receiving the support they need, allowing them to recharge and stay positive and supportive for their loved one. Tender Loving Care is in part a result of the journey my family and I took with our beloved Mom.

The experience I had with our mom was eye opening and very meaningful, but what I didn’t know is that I still had some learning to when the time came to care for my father.  Once again, here I was a Geriatric Doctor with vast experience in helping those with Mental Illness and Dementia. I was the expert, so why was it so hard to care for my own father?

My dad and I had a good relationship we were both very academic and hungry for knowledge.  My dad was very intelligent he was a doctor in his own right, with a PHD. Looking back, I see the signs a bit more clearly, but as many know you can’t always convince someone what’s best for them, especially if they have dementia.

My dad had lived alone many years in NYC and was fiercely independent. He started having “accidents”.  A fall outside which caused him to be hospitalized. My sister traveled to NYC to help him out after his discharge. Being with him day in and day out revealed his difficulty remembering things and managing his finances etc.  My sister and I tried to convince him at that time to come to live with us in Vegas, but he vehemently refused.  My sister and I knew we would need to have a backup plan, but within a month my Dad a very bad car accident and was hospitalized again. This time the hospital said he could no longer live alone. We finally able to convince him to come to Vegas and live with us.

When my dad moved in with us, I realized the extent of his Dementia or Alzheimer’s Disease. He was forgetful, lacked insight and judgment & was extremely paranoid and would often accuse me of stealing his money. Of course, this was not true, he was living in my house for which I paid all the bills etc., spent time with him, tried to take him out places.   While I tried to put my expert medical cap on and remind myself that it was his disease, and his hurtful accusations were unintentional, it was still very difficult to not be affected. I found myself having negative feelings toward my dad at times.

While I had moments of feeling sorry for myself and had difficulty managing my own feelings, I think I was more upset seeing the negative toll the dementia and paranoia had on my father. I saw firsthand, how the paranoia & confusion reduced his independence and his ability interact with me & his surroundings.

The increased paranoia significantly diminished his quality of life, so we tried treating him with an antipsychotic, Risperdal.  Even though I had seen the positive effects many times with my patients, I was pleasantly surprised at how much better my dad was with just a low dose of the medication.  It helped reduce his agitation and paranoia and gave him back some independence.  It enabled us to have more positive interactions as father and son and allowed him to participate more in his care.  We were able to watch Syracuse University Basketball games together, as we had our entire lives free of the paranoia and delusions that had negatively impacted that experience before the medication.  Medication helped him to accept assistance with care, like transfers to the wheelchair and getting in to the car which allowed both of us to enjoy going to his favorite buffet and dramatically improved his quality of life.

Being an expert in Geriatrics, Dementia and Mental Illness, I know full well the befits and limitations of the various treatments that are available.  Some Experts suggest that behavioral therapy is the only option, and that using medications to treat the symptoms of paranoia, agitation, combativeness, etc. should be discouraged.  I do agree that behavioral therapy can be a useful tool in helping to treat the behavior symptoms that accompany Dementia & Alzheimer’s, but I also know that for people with significant behavior problems, treatment with antipsychotic medications may be needed.   It’s true that antipsychotics have “black box” warnings, which discourage many doctors from using antipsychotics in patients like my father. As with any treatment there are pros and cons, risks and benefits. Of course, having an informed doctor, who is directly involved in the care and has ongoing oversite and monitoring of the effectiveness of the medication is important to ensure the desired effect is achieved. There are things a doctor can monitor to reduce unexpected side effects like checking the magnesium level and an EKG which helps reduce unintended risks of antipsychotic. It’s often difficult to tease out what behaviors are related to “Dementia” and what behaviors could be related to an infinite number of other overlapping medical and emotional processes.  In the end it is necessary to weight the risks and benefits and give patients and families the information to make the best treatment decision for their individual circumstance.

The positive experience I was able to have with my father confirms for me the benefits of trying antipsychotic medication in those with Dementia who also have negative symptoms and behaviors, like anxiety agitation, paranoia, aggression & combativeness.  The increased quality of life we both received by taking them reinforced what I already had experienced with many of my patients that medications often make the behavioral therapies much more effective.

My father and I shared a life time of experiences, I learned many things from him over the years, but the lessons and experiences I learned about being a caregiver from both my parents gave me a depth of understanding about emotional health that I could not have learned from anyone else.  I am truly grateful for all the love and lessons both my parents gave given me.

GERIATRIC MEDICINE
ABOUT US

Call us
Email Us